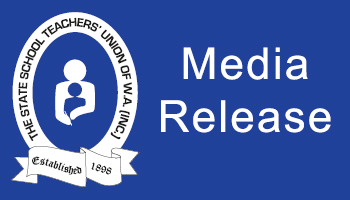 Hundreds of West Australian ‘public schools’ were planted in a spectacular display as part of the Fair Funding Now! campaign to win fair funding for public schools.

Today’s event also marks the launch of the Fair Funding Now! mobile billboards campaign in Pearce, Swan and Hasluck. These mobile billboards will spend time in the electorates, informing voters and the community of the importance of securing fair funding for local public schools.

“We have a very clear message from parents, teachers and voters about their disappointment over the Morrison Government’s decision to cut $501 million from funding for public schools in Western Australia over the next three years,” Mr Mulheron said.

“After six years we know that the Federal Coalition does not support public schools. Mr Morrison’s plan will leave 100% per cent of public schools in Western Australia below the national resource standard by 2023.”

“This means that no public school in Western Australia will have enough funding to meet the needs of its students for the next five years and beyond. That’s Scott Morrison’s idea of a fair go,” Mr Mulheron said.

“Today we have demonstrated the impact of Scott Morrison’s public school funding cuts with our field of Fair Funding Now! schools. This is a visual representation of every public school in Western Australia planted in the middle of Perth,” Mr Mulheron said.

“Each school represents a real public school in our community and the extra funding it stands to receive under Labor’s commitment for an extra $501 million for public schools in Western Australia in the first three years of a Shorten Labor government.”

“This additional funding, under Labor, is critically important for our schools and will provide for smaller class sizes, more one-on-one support and more help for students with disability,” Mr Mulheron said.

“We also welcome the commitment of the Australian Greens to Fair Funding Now for all public schools.”

The AEU has also launched a national advertising campaign reminding voters about the failure of the Morrison Government to fairly fund public schools. This national campaign will run across television, radio, newspapers, online and social media as well as billboards in the lead up to the federal election.

Today’s event will see the Fair Funding Now! mobile billboards start spending time in Pearce, Swan and Hasluck as well as other areas, informing voters and the community of the importance of securing fair funding for local public schools.

AEU WA Branch President Pat Byrne said that, according to the AEU’s latest polling, an overwhelming number of voters in Pearce have said that public school funding will be an important or very important issue for them when deciding how to vote.

“More than two thirds of voters polled in Pearce, including nearly 61% of Liberal voters, said a much greater investment in local public schools was a better use of federal funding than tax cuts for high income earners,” Ms Byrne said.

“This is a clear rejection by the electorate of the Morrison Government’s cuts to public school funding.”

“By contrast, public schools in Pearce would receive an extra $37,480,000 in funding in the first three years of a Shorten Labor Government,” Ms Byrne said.

“The message from voters is clear. It is time for a change of government, one that is serious about investing in our public schools.”

NOTE: The AEU’s national advertisement can be viewed here.

Protect education for the common good

Summary of SSTUWA issues in relation to Term 2 school operations