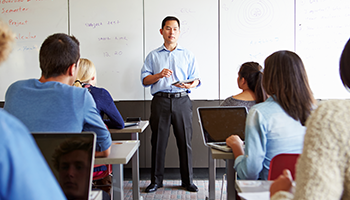 The Australian Education Union is urging the federal government to deliver on their election commitment of establishing a pathway to 100 per cent of the Schooling Resource Standard (SRS) funding for Australia's public schools following the release of the Productivity Commission's review of the National Schools Reform Agreement (NSRA).

The Productivity Commission review was set up by the Morrison Government to fix a flawed NSRA. However, the review did not take into account inequitable funding arrangements for public schools.

"It is a shame that from the outset, the review was prevented from taking into consideration the primary driver of inequity in student outcomes - that is the denial of full and fair funding for Australia's public schools," said Correna Haythorpe, federal president of the Australian Education Union.

"Improving educational outcomes for all students cannot be separated from school funding. Equitable school funding is a crucial piece of the puzzle that has been entirely overlooked by the review.

"The current NSRA has many shortfalls that fail to address inequity in student outcomes, workforce shortages, escalating workloads and student and teacher well-being. And with the subsequent bilateral agreements between the Commonwealth and state and territory governments, it has been used as a vehicle to deliver deep inequality in school funding.”

The first Gonski Review set out a clear framework for needs-based school funding, with additional funding for students from disadvantaged backgrounds. Over a decade later, the Productivity Commission's review has raised the same important points about the need to lift the outcomes of students from "priority equity cohorts" but failed to address the funding needs of these students.

"We have been going around in circles for over a decade. When will we address the elephant in the room that is public school funding?

"Let's not forget that every public school student in Australia is currently missing out on an average of $1,800 in funding every year, a damning legacy left behind by the Coalition Government.

"The sad reality is that successive governments have failed a generation of public school students, denying their schools urgently needed resources for more teachers, support staff and additional learning programs, especially for students with additional needs.

"2023 must be the year that delivers full and fair funding for public schools in Australia."

The AEU's attention is turned towards the recently announced review of funding arrangements by Minister Clare following the extension of the existing NSRA for another year.

"We are deeply concerned about the 12-month extension of the existing NSRA. Resources delayed are resources denied, and public school students cannot afford to wait any longer.

"The Albanese Government must meet their election commitment of establishing a pathway to 100 per cent of Schooling Resource Standard funding for public schools across Australia as part of this review.

"AEU members across the nation will be expecting nothing less," Ms Haythorpe said.